On July 20, I posted a blog about a German Shepherd in very poor condition.  A reader e-mailed me to inquire about her.  She came to visit, helped with her medicated bath, clipped her nails, then fell in love.

She named her Grace and wants to adopt her!  Once she brings in her two dogs to make sure they get along, she will go ahead with the adoption.

I'm so happy that Grace will find a home, and happy that I have readers of this blog.  Now we need to get the rest of the cats, dogs, rabbits, and hamsters adopted.
Posted by Lycoming County SPCA at 1:38 PM No comments: 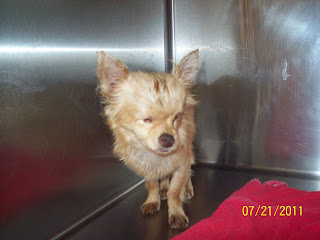 Teddy Bear needs someone with a big heart and the funds to pay for his care.  This little six month old Chihuahua has multiple birth defects.  He was the product of inbreeding between a mother and son.  Of the litter of 5, he was the only survivor.
He came to our attention by a caller who said that three little dogs were in a black metal crate in full sun when the temperatures were in the upper 90’s.  The dogs were panting heavily when Officer Woltz arrived.  He quickly transported the dogs to the shelter where they were wrapped in cool, wet towels and given water to drink.  Luckily, the dogs did not suffer further and we were able to cool them to a normal body temperature.
The owner will be cited for cruelty.  Even though we asked him to surrender the dogs for adoption, he insisted on the return of two.  Legally, we had no recourse.  He was instructed on the proper care of the dogs and hopefully he will comply.
In case you can’t tell, Teddy Bear has no eyes.  He also has a condition called Hydrocephalus; more commonly known as water on the brain.  This condition caused his fontanel (also called the soft spot) to remain open.  These are the conditions we can see.  We are not sure if he has other problems internally.  He loves to be held and have his neck scratched.  Since he is only 3.4 pounds, he is very easy to carry around, in fact; he very much enjoys being held.
If you, or someone you know, loves special little dogs such as Teddy Bear, and has the funds to provide a full veterinary work up and follow-up care, please come and visit.  There is something in this little dog that will melt your heart.
Posted by Lycoming County SPCA at 1:33 PM No comments: 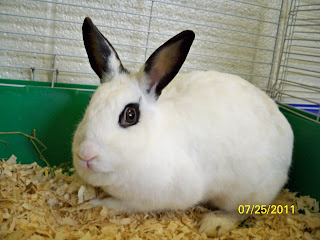 This is for all you bunny lovers.  You must check out our homepage at http://www.lycomingspca.org/ to see the rest of the rabbit pictures.  (And check out the names.  I think someone was hungry when they named them).  The owner of these rabbits originally had them in her house but become overwhelmed and moved them outside.  When the weather became too hot she decided to surrender them.  Rabbits do not tolerate the heat well so she made the difficult decision to find them new homes.

When pet owners are faced with the difficult decision to give up a pet I try to keep an open mind.  One can never be sure of the circumstances until "you walk a mile in their shoes".  Sometimes it is the best for the animal. Sometimes it is best for the owner.  (allergies, health issues, landlords).  People now a days are so quick to criticize.  Sometimes we have people who continuously get animals,  and regardless of instructions on the proper care of their pet, they fail to give even the basic care.  Plus there are those who intentionally, and willfully abandon their pets to the elements.  Those are the people I cannot understand.

However, we do the best we can to care for the animals, bring them to good health, and find wonderful homes for them.  Do you want a bunny?
Posted by Lycoming County SPCA at 2:36 PM No comments:

We seem to be having groups of the same problems.  Last week it was emaciated dogs.  This week its flea infested, sickly dogs.  (Three so far).  And today two investigations for over heated dogs.  Three little dogs were left in full sun in a black wire cage. (No water in sight) Two pit bulls were left in an unventilated shed full of feces and urine.

Our dog kennels are completely full and the phone is ringing off the hook regarding stray cats!

Thank you to all of the animal lovers out there who take the time to call us about these poor unfortunate animals that have been abandoned and neglected.  Pass the word-they need loving homes.
Posted by Lycoming County SPCA at 4:44 PM No comments:

Where Have I Been?

To say it has been hectic may be an understatement.  But the animals come first and if I don't have spare time to blog I know you will understand. 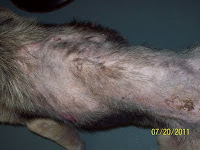 Summer is a difficult time for animals because of the heat, fleas and ticks.  This poor dog has major hair loss, emaciation, wounds, and fleas.  This neglect seems to be a trend.  And the worse part is that we may never find the owner who let this poor dog end up in this condition. 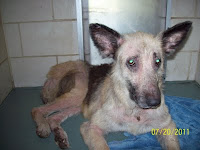 Posted by Lycoming County SPCA at 3:59 PM No comments:

Here's another emaciated dog we got  in yesterday.  He was abandoned in a rural area.  The poor woman who found him was just devastated about his condition and the fact that he was most likely dumped off.  Why do people do that?  The dog is in such poor condition between his emaciation and the fact that his gums were white.  The vet thinks he may have cancer and is bleeding internally.  We have some palliative treatment to see if he responds but it does not look good.  The worst part is we don't really know what is going on, how old he is, and if his former owners knew what was going on.  At least he is eating, and sleeping comfortably for now.
Posted by Lycoming County SPCA at 5:07 PM No comments:

So how is the Pennsylvania State Budget affecting us?  Not at all.  While many people think we are a government agency, we are not, we are a non-profit animal shelter.  We are not 'animal control', we are not 'dog catchers', and we have no authority regarding animals at large or barking dogs.

We do receive money from the Department of Agriculture Dog Law for stray dogs as well as a grant to help fund operations in the amount of $10,000.  This money is funded through the sale of dog licenses.   This is barely a drop in the bucket for our $650,000 annual budget.

Some townships, boroughs, and the City of Williamsport contribute funds to help us in the care of animals from their jurisdiction.  Again a drop in the bucket.

The Lycoming County SPCA funds three Humane Society Police Officers who enforce Pennsylvania Crimes Code 5511.  Wouldn't you think that a state that has an enforceable crimes code would fund the enforcement of those laws?  Do you think the Pennsylvania State Police or local police would enforce those laws?

Shelters are closing their doors across Pennsylvania.  What will it take for our representatives to step up and provide for the health and safety of its citizens?
Posted by Lycoming County SPCA at 11:24 AM No comments:

Do you know someone who would like to help us care for the animals?  One of our kennel attendants is leaving to persue full time employment.  In order to fill those shoes the candiate must be able to work 8 AM to 11 AM, including weekends and holidays, with some evenings.  The candidate must also have a valid driver's license.  Applications are being accepted at the shelter.
Posted by Lycoming County SPCA at 11:04 AM No comments:

It is with great sadness to report that Honey Bear is no longer with us.  If our information is correct, she was 13 years old and in renal failure.  I think her last moments with us were happy ones.  I'm certainly happy for having known her.
Posted by Lycoming County SPCA at 11:23 AM No comments:

﻿
This is one of the sweetest dogs!  She was brought in on July 1st in this condition.  We have been slowing working her up to a full diet to try to put weight on her.  We named her Honey Bear.  It's hard to believe that this little sweetheart can even walk.  She wags her tail when she meets someone, and when we prepare her meals she barks at us to hurry up.  We are not sure if she will make it despite our best efforts, but you can believe that we will give her the best care and attention we can to make her happy.
Posted by Lycoming County SPCA at 5:34 PM No comments:

Cows need us too!

Officer Woltz secured a warrant to check on 22 cows that were thin to emaciated.  I will never understand how someone can live on a property and not feed their animals!  I get so angry that I can barely put it into words.  Thank goodness someone saw these poor animals and called us to check up on them.  The owner had grain in the barn and they were ordered to get a round bale.  Dr. Hocker took fecal samples to determine if the cows also need wormed.  With our intervention, the cows should soon put weight back on.  Officer Woltz will be filing charges.
Posted by Lycoming County SPCA at 9:23 AM No comments: